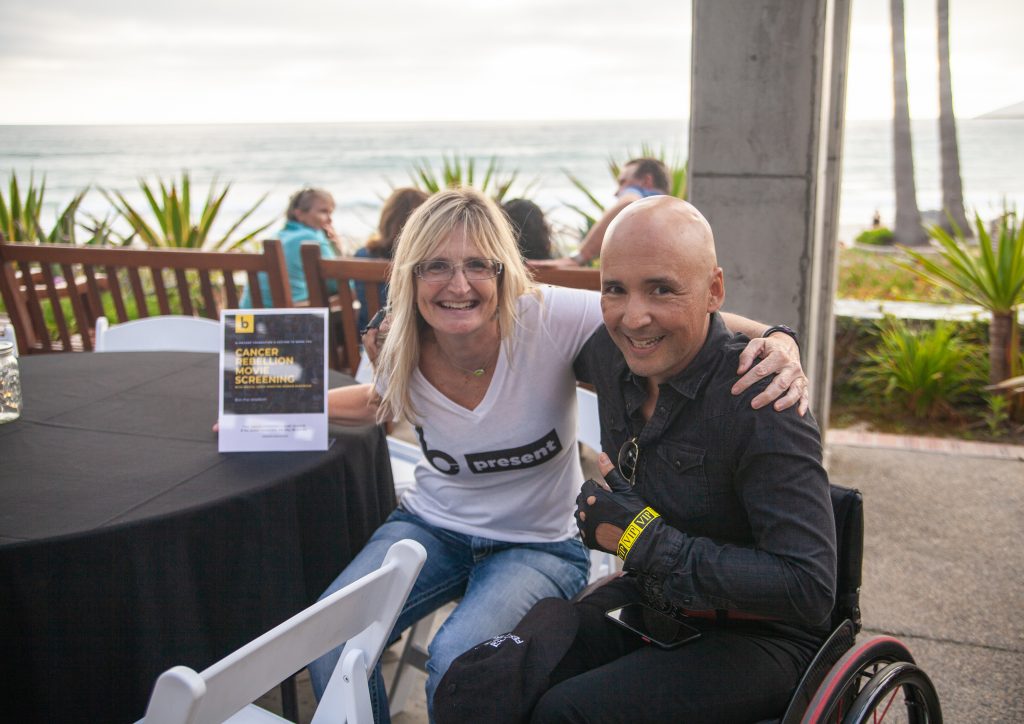 You’ve probably seen movies like 50/50 or The Fault in Our Stars, but what is it really like to have cancer as a teenager? Hernan Barangan, the director and producer of the new documentary, Cancer Rebellion, has experienced it firsthand.

On July 11th, as part of our b-aware program, we hosted a viewing of Cancer Rebellion at Del Mar’s Powerhouse Park Community Center in San Diego. In addition to the film, guests enjoyed a sunset social at the beach with dinner and drinks, plus an exclusive Q&A with Hernan following the screening.

At 15, Hernan was diagnosed with Acute Myeloid Leukemia (AML) and over the next two years, became pretty accustomed to hospital beds. To pass the time, he started watching movies and films. After ultimately beating cancer and finishing high school, Hernan began to think about what’s next. Drawing on his newfound interest, he decided to pursue filmmaking and went on to study film and theatre at the University of California, Santa Cruz.

After graduating from college, he worked on numerous music videos, commercials and films, but knew he wanted to revisit and create awareness around young adults with cancer. He was upset with how movies got cancer all wrong and wanted to portray it the right way. The idea for Cancer Rebellion was born.

Hernan decided to embark on a yearlong journey to all 50 states to document the stories of other young adults who had also been diagnosed with cancer in their youth. He wanted to deliver a story of unity stating “a story told in numbers is stronger than one told alone.”

A clear message of the film is that each of the cancer patients felt isolated at times. Hernan conveys some of those tough moments, like young adult patients being stuck in between pediatrics and adult hospital systems when it comes to treatment. They often find themselves feeling out of place among the superhero wallpaper and children’s tricycle races.

Many mentioned they never saw another teenager, being surrounded only by toddlers and doctors. While their friend’s problems were bad hair days and prom dates, they were dealing with chemo and having no hair at all.

“When I got cancer, I felt lost and alone. It’s a feeling that stuck with me for years after my battle. To explore my own experience, I film the stories of teen and young adult cancer fighters. They tell me about their triumphs and toughest times.” —Hernan Barangan

This documentary wasn’t just a tearjerker. Throughout the film, Hernan can’t help but show his comedic personality and genuine love for life. From “using the cancer card” to avoid a speeding ticket to legally driving 200mph in a Formula 1 racecar alongside racing legend Mario Andretti, this film is jammed packed with entertainment.

I won’t give away any more. Instead, go check out Cancer Rebellion for yourself, which is available now on iTunes & Amazon.

A huge ‘thank you’ to Director Hernan Barangan, and to all of our special guests who joined us for a Cancer Rebellion. We hope you left feeling just as inspired and empowered as we did. Whether you are a cancer patient, survivor, supporter, or simply interested in learning more, this documentary is a must-see.